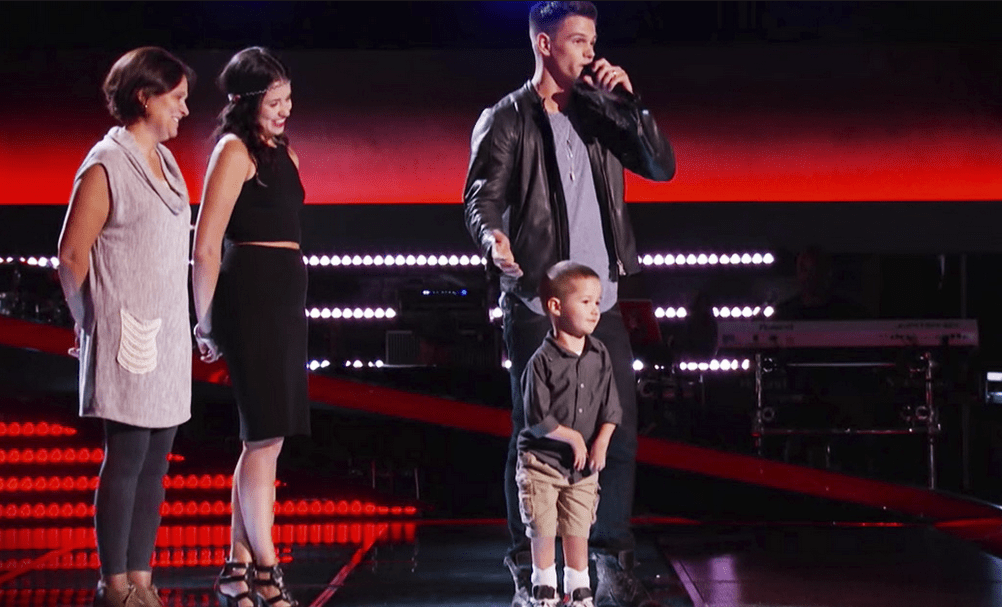 When Nick Hagelin stepped onto the stage to audition for The Voice, he had a big fan backstage in his young son Bash. Bash, along with his mom Christina, joined Hagelin on stage after the audition and it was immediately visible that Bash has special needs. Hagelin explained that doctors told them Bash might never be able to walk, but there he was, walking out onto the stage to show support for his dad.

At just nine days old Bash was diagnosed with Arthrogryposis Multiplex Congenita (AMC), a condition in which joints are permanently fixed in a bent or straightened position. Some children born with this condition do not survive, including one baby boy who was born just hours apart from Bash in the same hospital and delivered by the same midwife. That baby’s spin was bent and locked in a C shape and he was unable to breathe. In Bash’s case, his elbows were locked straight, and his hands locked in a bent position. His knees and feet were also affected. Doctors said that he may never be able to take care of himself, but his parents were determined to help their son become independent in any way they could.

“Hard work has always been a part of this boy’s life and it’s his perseverance and winning attitude in the face of adversity that make him such a remarkable individual. […] It’s never about what you can’t do and always about what you can do,” Hagelin says in a video about Bash. His family chronicles Bash’s challenges and achievements in order to raise awareness for AMC and help other families discover therapies to help their children.

Hagelin describes his son as “full of wonderment and bliss with a big appetite for life.” He says that Bash “greets each day with a smile, grateful to be alive.”

Bash’s devoted family has used every therapy available to them to help Bash, and that plan eventually paid off. When Bash was one and a half, he was finally able to move around on his own by rolling, scooting, riding his toys, and using a specialized device that allowed him to walk with assistance. His parents worked tirelessly to help him stand up and flex his arms. Then on Easter Sunday at two years old, he took his first independent steps, which Hagelin called a “miracle.”

Without elbows that bend, it has always been extremely difficult, and one would think even impossible, for Bash to feed himself, but this boy doesn’t quit. Even after so many attempts that end with the fork on the floor, he keeps going and keeps smiling. At age two, Bash became eligible for surgery on his elbows that his parents hoped would finally allow him to overcome this challenge.

“I want to feed myself,” he says as his parents prepare him for his surgery by having him perform “surgery” on a Buzz Lightyear toy. And he would. That surgery was successful, and his elbows now have a 90 degree bend allowing him to feed himself consistently. He still has a lot of work to do to strengthen his muscles which are weak and underused, but his family recently learned about a device called Magic Arms that can help him gain even more mobility.

Most of his treatments have not been covered by insurance, so the Hagelins have had to rely on donations, but Bash, now age four, has a huge network of support which has grown even larger thanks to his father’s appearances on The Voice. Bash is showing the world that children with special needs and different abilities live beautiful lives. He has a contagiously happy spirit, a hilarious sense of humor, a dimpled smile, and a very bright future.