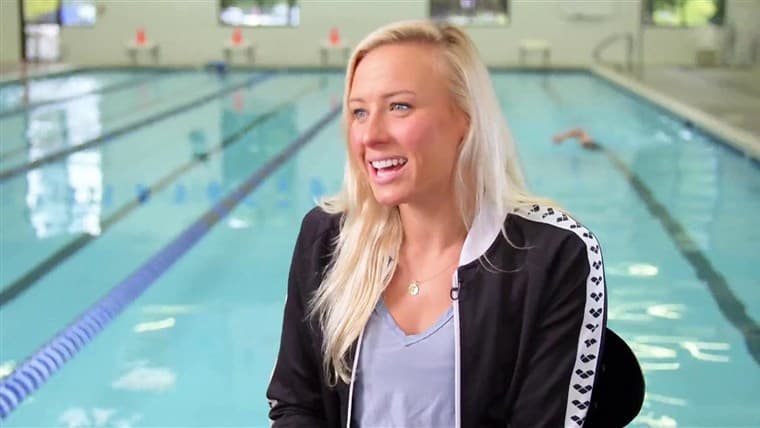 After Toyota’s Super Bowl ad captured the touching life story of Paralympic swimmer Jessica Long, the media raced to report on the athlete. But many of them bypassed crucial details about the 28 year old – including her Christian faith and pro-life position.

Toyota, a partner of Team USA, highlighted the 13-time Paralympic gold medalist on Sunday. Her story is one worth telling: She was adopted from a Russian orphanage as a baby and lost both of her legs as a toddler only to become the second-most decorated U.S. Paralympian in history. But there’s more to the story. She centers her life on God, she says, and advocates for adoption in place of abortion. That’s because, for her, “I would rather know that the baby would have a better life than I could give him or her instead of just terminating the baby.”

The minute-long ad doesn’t show all of that – but it struck a pro-life tone. The camera follows the champion athlete as she “swims” through her life story, beginning with her adoptive mother receiving a phone call informing her that little Jessica is available for adoption.

“We found a baby girl for your adoption,” a woman’s voice tells her mother, “but there’s some things you need to know.”

“She’s in Siberia, and she was born with a rare condition,” she continues. “Her legs will need to be amputated. I know this is difficult to hear. Her life, it won’t be easy.”

That didn’t deter Mrs. Long. “It might not be easy, but it’ll be amazing,” she responds. “I can’t wait to meet her.”

Steve and Beth Long – a Christian, homeschooling family in Baltimore, Maryland – adopted Jessica when she was just 13 months old. Her legs were amputated when she was 18 months old due to a condition called fibular hemimelia, which meant that she did not have fibulas, ankles, heels, and most of the other bones in her feet. In total, she has endured more than a dozen surgeries.

But that didn’t stop her from living life. God had a plan.

Instead of a phone call, her adoptive parents actually “went to a church meeting and they saw a picture of me,” she told I Am Second last year. “They were told that this little Russian girl has leg deformities and really needed to be adopted. And my mom just said, ‘We knew that you were the child that God wanted us to adopt.”

Jessica loves both of her mothers.

“I’ve definitely dealt with a lot of emotions and questions regarding my adoption, but I am so grateful she chose to give me life,” she wrote of her birth mom in an Instagram post in 2019. And “My mom who raised me is the most bubbly, fearless, incredible woman and I’m honored to be her daughter.”

In 2013, she traveled with one of her five siblings to meet her birth parents.

“I want them to know that I’m not angry with them,” Long said in an NBC film, shortly before a tear-filled reunion. “I think that was really brave, and I don’t know what I would have done if I was in her situation, at 16 and having this disabled baby that they knew that they couldn’t take care of. I want to tell her that when I see her that, if anything, I have so much love for her, my mom, because she gave me life.”

Jessica is pro-adoption and pro-life, according to a Celebrate Life Magazine (CLM) story published in 2014.

“If you truly can’t care for the child and can’t give the child the life he or she deserves, I would give the child up for adoption, because there is going to be a family out there who will love that baby—no matter what the diagnosis is,” Jessica said. “I know it can seem really discouraging, but in the end, I think that if you would abort the baby, you would definitely regret it. I think, for me, that I would rather know that the baby would have a better life than I could give him or her instead of just terminating the baby.”

Jessica also believes in the power of prayer and faith, telling CLM that “It gives me all of my strength.”

But her faith journey is just that: a journey.

“I can’t think of a single childhood memory that we weren’t always at church or with our church community,” she told I Am Second. “And what I heard a lot of is that, ‘God made me this way.’”

“I knew I didn’t want anything to do with this God that made me this way,” she added. Among other things, she struggled with anger and feelings of being unwanted.

Years later at a Bible study, that changed.

“I just think, I just couldn’t do it alone anymore,” she said, before walking over to a woman who prayed with her.

“I just said, ‘I want to give God my whole heart for once,’” she remembered. “And as soon as I prayed, it was the first time in my entire life that I felt enough.”

She stressed that it’s a process.

“I am constantly reminded every day that I need to give it to God,” she urged. “Every day when I put on these two prosthetic legs that are heavy and they still hurt me. My legs still cause me pain. And I think it’s honestly this really cool, beautiful reminder that I can’t do it on my own.”

At the end of races, she pictures God swimming along with her.

“When practices get tough or races have been hard, I just call unto Him,” she concluded. “God, this is hard.”

And she hears Him respond: “Just keep trying, Jess. I’m here with you.