My Unique Story of Being Newly Pregnant at 17 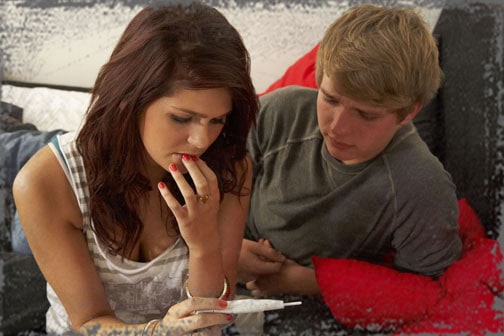 I am 17 and just found out at my gynecologist office just there to pick up a refill of my birth control on January 15, 2014 that I am pregnant with my almost 20 year old boyfriend’s baby. We have not told our families for different reasons.

We have not told his family, because his mom would be very mad due to the fact that my boyfriend just lost his job a few months ago and is living with her, his dad, and little brother again in a two bedroom house(yes…crowded especially considering I am there literally every weekend and weeks when I’m out of school). I wouldn’t blame her though because neither of us still have our jobs right now and neither of our families could financially support our baby even if they wanted to. Which is why I was so confused and going over adoption and abortion in my head so many times, but my boyfriend said that we can do this, he’s stepping up to be a dad, and that if I get an abortion we are over with.

I understand his frustration and I couldn’t do an abortion even if I tried…I do love my baby. It’s just hard to think that of all times NOW would be the time my birth control expires out of the 3 years I’ve been on it and got me pregnant.

My last day of school is January 23, 2014 so I’ll be out of school thanks to early graduation. But now I won’t be able to attend my college of choice, because I wouldn’t want to be away from my baby and my boyfriend would be at work. I’m still going, but will do online college for the first few years which was never a thought to me, especially with all my acceptance letters coming in the mail now.

I’ll be barely 18 when I have my baby in August and my birthday is in early May…I think(I’m still trying to get my gyno to call me back and tell me how far along I am from my blood work, but I’m guessing I’m 9 weeks as of tomorrow.) Anyway we aren’t telling my mother because the sad fearful truth that she will try to kill and/or harm me and my unborn child. She’s always been physically and mentally abusive to me. She’s attacked me, beat me, cut my hair off knowing it was the only thing I loved about myself, called the cops and lied to them to try to get me in trouble, she’s kicked me out on the street with NOTHING(no cell phone, clothes, toothbrush) and constantly felt the need to steal hundreds of dollars from me, wish death and harm upon me, and even almost kept me from graduating High School and going to college just because “she doesn’t like me”.

She’s never really taken care of me and I pretty much take care of myself and do what I want because she doesn’t care about me. My mom, little brother and I are living with my grandma in a three bedroom house right now and my mom’s income is literally ZERO. She has no job, no money, and an abusive husband(my stepdad) who doesn’t do anything for us. She’s hurt me so much to the point I want nothing to do with her and don’t even want her to be a part of my child’s life not only because she doesn’t deserve it, but also because she has admittedly said she would harm her grandchildren and didn’t want to take care of them while they were young and couldn’t feed themselves. She is a terrible person and doesn’t even deserve to know.

I wouldn’t even want to tell her if I didn’t need to use my insurance card for prenatal care and I’m sure she’d realize it when she saw it on her insurance…right? (Btw I’ve already started prenatal pills I’ve gotten at Walmart so I’m doing what I can for now) We don’t want to tell her until I am in a safe position and place so she can’t harm me and my baby.

Oh yeah and the big shocker is…none of my family even knows about my boyfriend AT ALL. They have no idea I have a boyfriend even. That’s how un-involved they are in my life.

They don’t know I spend every weekend with my boyfriend and his family. So not only will it be a big shocker to know I have a boyfriend, but I’m also pregnant even though I felt(and still feel) it is none of their business.

My family have all hurt me and made sure I felt unwanted. My boyfriend and I decided not to allow them in our children’s lives for now which hurts me because they will be very close to his family and wonder why not mommy’s family, but if you knew my family you’d understand it’s for selfless safety reasons.

Anyway that’s a glimpse into my story and any advice, courage, or opinions are welcome as long as you’re polite and respect me and my boyfriend.

Thank you for reading it all if you did!!