The Love Of A Child 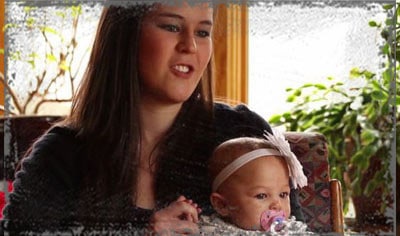 I’ve written to you before. My name is Kayla. I will be 18 on October 13th. I thought maybe, writing my story could help some girls out that were in my shoes.  I was 15 when I first became pregnant. It was March and my boyfriend of a year and a half had broken up with me after he had found out I was pregnant.  Even though I was so young, I was excited. I couldn’t get the thought of having a child running around calling me mama out of my head. I just couldn’t wait for my due date that December.

But on March 18th, 2007 I began to heavily bleed, got a fever of 102 and became so sick that if I even moved I would vomit. I knew that the baby couldn’t have survived all of that. I had my fist miscarriage and I became so depressed.  Every time a saw a baby I would almost cry, wishing that I had still had my baby. But, by the time December rolled around, I finally told myself I would just continue on and do what needed to be done, like finish school and get a job, before I had a baby.  That didn’t last very long. March 24th, 2008 I found out I was 5 weeks and 2 days pregnant. I was so scared that I would have another miscarriage that I waited till I was 7 weeks along to tell my father.  He was quiet. All he said was ‘whats done is done.’ I told my mom the next weekend and she told me that there was no way I was pregnant and when she finally realized I wasn’t lying, she said ‘once you finish this school year, you will go live with your father.’

At 14 weeks pregnant, I moved to live with my dad. I had a job at a theme park, bussing tables. I quickly learned that maybe bussing tables wasn’t an ideal job for me. I switched to a position they called carts.  I worked in the little food stands all around the park, as a cashier and food cooker. After a month of working in that department, I had to switch because every night as I left work, my managers and supervisors had me in tears cause of how mean they were to me. Finally in August, I quit.  My mother asked me to come home. My grandmother had found out she had cancer. It wasn’t that bad yet, but she needed someone to take care of her when she started chemo.  About a week later, my grandma went in for scans and she had asked them to look at my grandfather. She thought he had Parkinson’s Disease, but he actually had stage 5 cancer.  For 5 long weeks, we watched as my grandfather withered away and became a ghost of himself. On October 2nd, he passed away in his sleep. I cried for a week straight. All day, every day. I hid in my room and just cried. I was single. I was on my own. My family was paying attention to each other and totally ignoring me. I had no help. I dealt with it the only way I could, crying.  I wanted to give up. My hero. The man I thought would always be there for me. Had passed away because he had gotten cancer from his smoking. Both him and my grandmother had gotten their cancer because of those stupid cigs that everyone in my family has to have. I vowed to myself, I wouldn’t smoke and that I would make sure my daughter wasn’t around it.  That didn’t really come true.

On December 9th, I went in to be induced. I was due on November 29th, but she decided she just didn’t want to come.  They started my induction. It was a LONG process and it wasn’t that bad till the next morning when they popped my bag of water and they started pitocin.  I labored for 14 hours and 7 minutes total. I got the Epidural at around 8:30 that night. I went straight from a 7cm to 10 cm within 5 mins of getting the Epidural.  I pushed for about 3 hours. Finally a doctor said that my daughter was facing up and now down and that she was stuck. He said I could keep pushing, but the odds are, I could break her neck or sufficate her. I just couldn’t loose her.  I went with the c-section. She was born at 10:37pm weighing in at 8lbs 0.9oz and 21 and 3/4 inches long. She was the most gorgeous baby I had EVER laid eyes on. I named her Alessa Naomie Kathryn R.

I didn’t get to hold her till she was 2 hours old, but as I held her, I just knew everything was alright in the world. I was happy. I had my beautiful daughter.  The next day she took to the breast and everything went amazing. Till I hit 1 week post partum. I got an infection. It caused an open wound to form, and they started stuffing it with gaze.  When I was in labor, I had a fever, but they never gave me anti-biotics, thus I got a staff infection.  At 3 weeks pp, they decided that they would use a wound vac. It’s a small machine that you carry with you everywhere.  It was so painful that even my pain meds didn’t help when they changed it. I would cry almost everytime and beg for them to just let me die.

I still have problems with my c-section. But, I find that it’s all worth it to have my gorgeous daughter running around the house!  When my daughter was 2 months old, I started talking to an old ex of mine from school. He lives in Washington. We started dating. He is an amazing guy. But, we do have our problems.  The main one, he smokes. I hate it so much. But, I love him. He is trying to quit. At least he says he is.  But, after we started dating, everything became so much better.

But then my grandmother passed away.  I was upset I didn’t get to see my grandmother again before she died, but for my daughter’s sake, I wouldn’t cry. Towards the end of August, things started to take a turn for the worst. Josh’s grandparents had talked him into going back to Washington. And I had found out I was pregnant.  I didn’t tell him. I knew he wanted to go to Washington, but two days after I got my positive pregnancy test, I miscarried, on the 25th. A couple days later, I told Josh, it was the hardest thing ever.  That Friday, I drove him home to Washington. A 2 and a half hour drive. After that, we had a hard time talking to each other. All he has is the internet, and my cell phone. My phone that has a broken charger port and a fast dying battery.  I hear from him now and again. He says he is going to come back home, but I’m not sure if I believe him.

I’m tring to stay happy. I have a beautiful Nine and a half month old little girl.  She crawls every where, uses anything and everything to pull herself up into standing. She says mama, dada, nigh nigh, bye, hi, hey, yeah, baba, booba, and migh migh (short for her biological father’s name Michael). She is smart and can get into anything she wants to.  It breaks my heart that whenever she sees a picture of Josh all she does is say ‘dada dada dada’ and just stare at it.  But, she gets better everyday about him being gone.  Sometimes, I wonder where I would be without my miracle baby. With out this beauitful little girl that is my heart. She scares me all the time, but she gives me the greatest joy I could ever imagine.  She might not have come when I wanted a child, but she is by means no mistake. I only wish I could provide for her better.  But, I’m glad that my family didn’t talk me into adoption or abortion.  Life has been hard, but she has given me the strength to do everything that needs to be done.  I dropped out of school and got my G.E.D. in 2008, but next month on October 12th, I will start going to college online to better myself for her, to make better money so I can get her things I never got.  She makes me a better person. She makes me happy, and she gives me all the love I need to make it day by day.  I get depressed when I can’t talk to Josh, but Alessa always comes over to me, and smiles and that’s when I realize I can’t be depressed around her, because she is my happiness.  I just hope, that if any girl is in my position, that they don’t give up. They give life and everything they got and make it work for their child. Because the love of a child is all a parent needs to be strong and the love of a parent is all a child needs to be happy.  Thank you for reading,  Kayla and Alessa

Wow! You have persevered through a lot in the last couple of years. Good for you for picking yourself up over and over again and keeping on! I admire you so much for your strength and perseverance. I’m sure your little girl is such a JOY and light in your life! She sounds like a real cutie.  Keep up the good work. You CAN do this. One day a time. You have been given the strength you need to get this far. Keep trusting…keep moving forward.  If you need someone to talk to, please don’t hesitate to write…anytime!