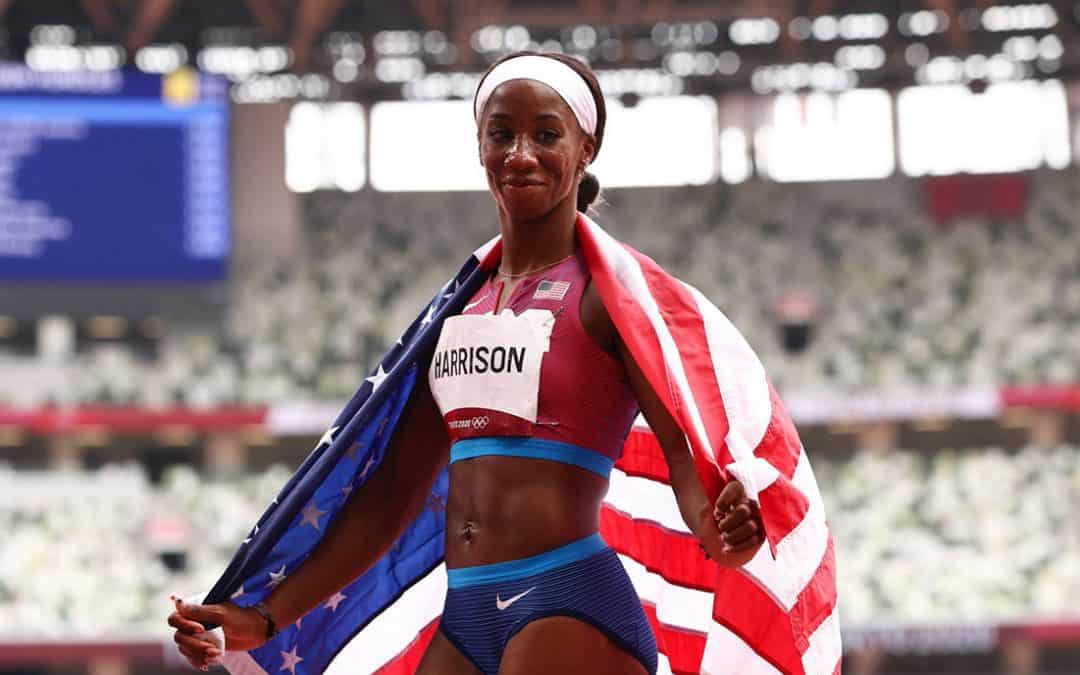 Early life
Kendra Harrison was born in Tennessee on September 18, 1992, and adopted by Gary and Karon Harrison; she grew up in a large family with ten other children, eight of them also adopted. Harrison’s first sport was soccer; she took up track and field at Clayton High School. She soon became a leading scholastic hurdler, winning state championship titles at the 2010 and 2011 North Carolina Class 4A state meets; in 2011 she also won the 100 m hurdles at the New Balance Nationals and was named Gatorade North Carolina Girls Track & Field Athlete of the Year.

Harrison transferred from Clemson to the University of Kentucky after the 2013 season, together with sprinter Dezerea Bryant and coach Tim Hall. She continued to develop, winning both the 100 m hurdles (12.86) and the 400 m hurdles (54.76) at the 2014 Southeastern Conference (SEC) championships; she was the first athlete to win both events since 1999. She entered the NCAA outdoor championships as the leading favorite and collegiate leader in the 400 m hurdles, but failed to match her personal best and lost to Texas A&M’s Shamier Little; in the 100 m hurdles she placed fifth for the second consecutive year.

Harrison injured her hamstring in the winter of 2014–15 and missed the early part of the 2015 indoor season. She returned in time to win the 60 m hurdles at the SEC and NCAA indoor championships, setting personal bests in both meets; her time in the NCAA meet (7.87 seconds) ranked her fourth in the world that indoor season. Harrison also won her first outdoor NCAA title in 2015, winning the 100 m hurdles in 12.55; in the 400 m hurdles she placed second to Little in a personal best 54.09, at that point the second-fastest in the world that year.

In November 2015, Harrison was named as a 2016 recipient of the NCAA’s Today’s Top 10 Award, presented annually to 10 individuals who completed their athletic eligibility in the previous school year “for successes on the field, in the classroom and in the community.”

Professional
Following her graduation, University of Kentucky coach Edrick Floréal continued to train her. At the 2015 United States championships, which doubled as trials for the World Championships in Beijing, Harrison decided to concentrate on the 100 m hurdles only; she set a personal all-conditions best of 12.46w in the heats and ran a wind-legal 12.56 in the final, placing a close second to 2008 Olympic Champion Dawn Harper-Nelson and qualifying for the American team. The Americans were heavy favorites for the world championships, but underperformed; Harrison had a false start in the semi-finals and was disqualified.

Harrison opened her 2016 indoor season winning the 60 metres hurdles in Lexington, Kentucky, Karlsruhe, Germany and Glasgow in 7.92. In a tightly competed race at the 2016 USA Indoor Track and Field Championships, Harrison took second place by one hundredth of a second to Brianna Rollins, setting a personal record of 7.77 seconds and moving herself into 13th place on the all-time lists. At the 2016 IAAF World Indoor Championships one week later, Harrison led the qualifying with 7.81 seconds. However, in the final she hit the first hurdle heavily and never recovered, ending in eighth while Nia Ali (the least favoured American) took the title.

She began the outdoor season in April with the fastest opener recorded by a hurdler, 12.36 seconds, to go up to ninth on the all-time lists. A run of 12.42 followed at the start of May. Then at the Prefontaine Classic in late May she perfectly cleared all the hurdles and won in a time of 12.24 seconds – the second fastest time in history after Yordanka Donkova’s world record of 12.21 from 1988.[18] She was favored to win the 100 m hurdles at the 2016 United States Olympic Trials in early July, but only placed sixth in 12.62 and missed qualifying for the 2016 Summer Olympics in Rio de Janeiro; the three spots on the American Olympic team went to Rollins, Kristi Castlin and Ali.

Harrison broke the 100 m world record on July 22, 2016 at the London Müller Anniversary Games, running 12.20 (+0.3 m/s) to lower Donkova’s mark by one one-hundredth of a second; Rollins, Castlin and Ali placed second, third and fourth in the race. The trackside clock in the record race initially stopped at 12.58, the unadjusted time of runner-up Rollins, as Harrison ducked under the timing beam at the finish line.