He Wouldn’t Help Me 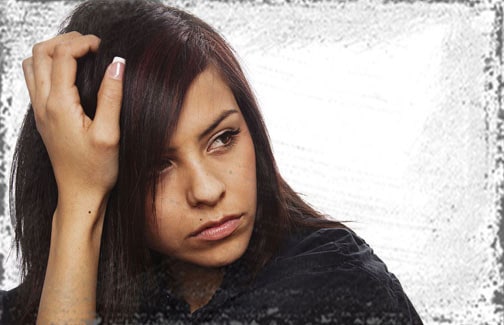 DearLisa— Just today I found today this web site and I love it. It made me feel like I wasn’t the only one going throught all this. Abortion was something I never could talk about, I knew my friends weren’t going to understand so I never told them. I really could relate to some of the stories told, and it made me so much better knowing that I’m not the only one going through all this.

I got pregnant April 2004. I was 8 weeks when I decided to get an abortion. I went to the clinic to do a pregnancy test and it came out positive, my baby was due December 25. I had been with my boyfriend for almost a year, and we always talked about our kid’s names, and stuff like that, so I thought that he would be happy. We had never fought, or got into arguments or anything like that so I was exited on telling him. I didn’t see him on the weekend and so I went out with my sister and my boyfriend’s friends. One of them asked me where was Louie (my boyfriend) and I said that he was with friends. He told me that I should really know where he was because he was doing something else. Part of me believed him and I knew I had to tell him a.s.a.p. I called him on Sunday to tell him that I was pregnant and before I could speak he broke up with me. I told him that I was pregnant and the first thing that came out of his mouth was that it wasn’t his and that he wasn’t going to take care of it. My heart dropped and my throat just shut down. He told me that he wanted me to have an abortion, and I said no. That with or without his help I was going to have the baby. He started telling me things that I never imagined would come out of mouth, and I was just crying on the other end of the phone. I was 17 and I still had to finish HS and I didn’t even have a job, and my parents never even knew my boyfriend so I knew I couldn’t tell them. I told my older sister and I told her what he had told me. He was 21, so my sister was furious because he was acting like a child. She called him and he told his side of the story and my sister was just going off on him, which made me feel good knowing someone was there for me. I knew I was too young to have the baby and my sister started telling me too. I knew I wasn’t going to provide for my child, the things it deserved, so days went by and I decided to have an abortion.

I called Louie and told him that I was going to do it and that it was going to cost $345. He said that he wasn’t going to pay for it. I told him you pay this or you’re going to be paying child support for our baby, he paid for it. I went to the clinic and he met me and my sister there. He never said hi to me and sat away from me, like I was some sort of a disease. When we went up there to pay he said to me “there goes my car payment”. And I just wanted to die, to realize all that time we were together, he never cared. As I was reading the consent form and the procedure, I started to cry, I had to sign and I couldn’t. As I was looking at the paper my boyfriend said “Can I go now, do you need me to pay for anything else.” And my sister was about to launch at him, but I told her to calm down, he wasn’t worth it. He left without even saying a word to me, and I haven’t talked to him ever since.

When they called my name to go in I was already in tears, I cried all the way to the bed. I woke up and I was hurting, my stomach felt like someone had been punching me forever. I couldn’t walk and stayed there for a little bit. I went home and from that night on I never stopped thinking about it. I cried everynight because I knew I was never going to see my baby, and that I choose to kill my own flesh and blood. Louie till this day never called me to see how I was or if anything came out ok. I never told anybody but my sister.

Christmas came and it was the most sad day for me. Knowing that I could’ve had my baby. I live with this burden everyday of my life. I’m doing much better now, and I go out and have fun, but no matter how much fun I’m having or as long has it been since it happened, my baby is the first thing I think about in the morning and the last thing I think about before I go to sleep. I know every Christimas will be different, but is something I’m going to have to live with for the rest of my like. Thank you for taking the time to read this.

When I read your e-mail it made me cry and I was angry at the same time. To see that someone treated you so unkindly. I see a lot of guys treating girls unkindly – and this guy in particular hurt my heart for you quite a lot!

I totally understand your broken heart and your hurt. I’ve been there myself and I truly hope that you don’t even give this guy a second thought. There may come a day when he will be sorry for what he did and he may come running back saying he was sorry – but my dear precious new friend. Please DON’T ever give in to this guy again. He is not even close to good enough for you.

In the meantime – you need healing. Can I share my story with you so you know that you are not alone in your heartache? I too had an abortion and to this day I regret it. I have taken the steps go get some healing, and the sting of my wrong-doing is gone. So is my guilt and shame. That is why I am here. To share with girls like you who feel like you are all alone, when in reality you are not. I’d love to offer my hand of friendship to walk the steps of healing with you.

First – let’s check out this website. Let’s locate a place together where you can find some post abortion healing. I did this for each of my babies. I went (with a small group of other hurting girls) through a book called Forgiven and Set Free written by Linda Cochran. (You can find this book in our “Standupgear” section and order it for yourself.) It was an amazing journey of healing that I made and in the end, I found freedom. I will give you the site in a little bit.

But first – let me share with you: I tried to bury my pain in drugs, alcohol, promiscuity and anything I could to alter my feelings. Just to bury the pain. Then, as my story says, I met Jesus Christ. He really did change my life. I’m not talking about going to a solemn church and being all quiet in my Sunday best on Sunday morning. I mean a real, living relationship with Him. I talk to Him daily and He touched my heart and healed my heart. To have a personal relationship with Him only takes two things. Believe then ask. That’s it! Yep!

Trust me Estela – when a girl answers the phone, more than likely she will be just like you and me. Someone that has had an abortion, but found healing and is out to share that healing with other women like you and like me.

Now – what I want you to do is sit back in your chair. Go ahead – sit back. OK – take a deep breath as deeeeep as you can. Hold it for a second. Now let go. Say out loud, I am a Stand Up Girl! I know that sounds silly saying it out loud – but I think sometimes we need to hear it out loud.

You have stood up and spoken truth about your pain. You are now NOT alone and the next step is to find healing.

Thank you for your e-mail and I know it took a lot of courage to open up like you did.