The Miracle of Five Prayers and Two Brothers 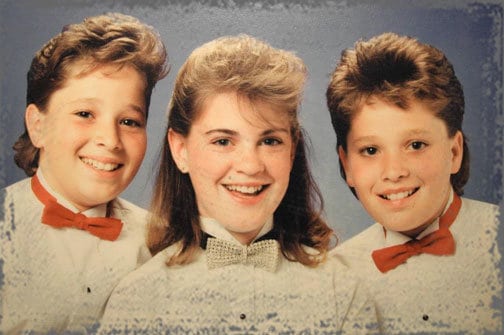 Posted to my Facebook page on November 21st… November is National Adoption Month and today is National Adoption Day. In 1976, Massachusetts Governor Michael Dukakis announced an Adoption Week in his state to promote awareness of the need for adoptive families for children in foster care. In 1984, President Ronald Reagan procla…

In 1976, Massachusetts Governor Michael Dukakis announced an Adoption Week in his state to promote awareness of the need for adoptive families for children in foster care. In 1984, President Ronald Reagan proclaimed the first National Adoption Week and in 1995, President Bill Clinton expanded Adoption Week to the entire month of November. Thank you, gentlemen. And thank you to childwelfare.com for the information.

Adoption stories are many and varied, spanning time from the day Moses’ anguished (albeit prophetically wise) mom placed him in a basket among the reeds on the banks of the Nile (in order that she might spare the tiny future leader of Israel from the Egyptian king’s decree of death) to today’s stories of open and international adoptions, foster care adoptions, step-parent and grandparent adoptions, and the adoption of adults.

Common threads are elaborately woven into these stories as innumerable lives are blessed with love and hope and indescribable joy at the arrival of an adopted child. For many, it’s as miraculous as a birth. The gift of life cannot be measured by the means with which it is delivered.

Adoption often comes with the subtle realization that adequately and suitably giving thanks to God and everyone involved in the process is seemingly impossible.

And if the adoption process is initiated by a fragile birth mom courageously making the most wrenching decision of her life, it truly IS impossible to give her thanks enough. Assuredly impossible. We can give these mothers peace in their minds, but I doubt we can ease the pain in their hearts. I believe that takes an act of God.

In gratitude and honor of the birth parents and adoptive families, the care workers, the agencies, the attorneys, the volunteers and the friends of those enriching our world through means of adoption, I share my family’s story in hopes of bringing more love and joy and inspiration and encouragement to their stories as well.

I dedicate this journey to my precious lamb Karla. My first and only birth child and my only daughter. By the ripe old age of two, she had the forceful resolve of Yoda and in turn gave me the resolve to find the sibling she begged us to provide. Upon arrival of her babies, Karla insisted on collaborative roles in bottle feeding, diaper changing and binky search-n-rescue missions. Her most famous performance lines are: “I do it!! I ho’d it!!”…”Honey take a bottle!”…and my favorite, “Mmm, smell the caffeine, Mommy!” from the coffee aisle at Hughes Market.

Karla now resides in a remote area of scenic Arizona and is occasionally sighted at an airport or on a golf course.

In the spring of 1977, nearly two years after the miraculous birth of our beautiful daughter Karla (a challenging pregnancy due to my ID diabetes), my husband and I decided to get pregnant again. Oh baby.

I greatly desired for the newbie to be born in May. It is such a glorious month and, being a May baby myself, it’s my favorite. Unfortunately, many months passed with no pregnancy. The wait was painful, both emotionally and physically, and infertility due to endometriosis was the final diagnosis. Fertility pills and earnest prayers for twins became a daily routine for me. I discovered how blessed I had been to get pregnant the first time. It was a miracle.

Failing to fertilize, we turned our focus to adoption. I first contacted overseas agencies but international adoption was beyond our reach. Attempts with American agencies were futile. We enlisted the support of friends who had adopted several children of American Indian descent. But calls to tribal agencies and eventually the Bureau of Indian Affairs repeatedly told me that new laws were passed to prohibit the adoption of American Indian children outside of their tribes without the birth father’s consent in court. I gave up on adoption.

In the depths of despair, I decided to find distraction through buying our family a new house. I found a fixer-upper in probate and dove into the challenging process, leaving behind the newer comforts of a three-year-old four-bedroom home for a three-bedroom older home demanding full-scale renovation.

We were in escrow and a month away from our May move-in date when suddenly my period was late. What incredible timing this is, I thought…we’re moving AND pregnant…am I dreaming?

Never mind more children. I was done. My devastation was complete. I skipped Easter Sunday services and in my lonely grief I self-destructively feasted on chocolate-covered marshmallow eggs. (The ones in the scary yellow styrofoam egg carton.) Not a great idea for a diabetic, but understandable.

The following Monday around noon the phone rang. It was our pastor. Our church family was very aware of our attempts to grow our family of three; my pastor shared words of comfort to soothe my sorrow.

Much to my surprise, he and his wife had been on the way to see their attorney regarding an adoption opportunity (they, too, had been trying unsuccessfully to have another child) but they first stopped by their doctor’s office for a pregnancy test…just in case. Sure enough, they were very pregnant (their 5th time). At that point they realized the Lord had a different plan all along. Babies babies everywhere.

I clearly remember hearing “so, how would you like to adopt a set of twins?” Anything immediately following those words is hard to recall.

After some pretty crazy moments of joy and praise and wonder, my pastor gave me the attorney’s phone number with instructions to call immediately and begin private adoption procedures.

The attorney told me the story of a young girl who could not afford to keep her babies and that the birth father would not marry her if she did, so she wanted them adopted at birth. And there was an issue that could be of legal concern to us, something we would need to pray about.

“The father of the twins is of American Indian descent,” he said. “He is one-half Apache. There are new laws about American Indian adoptions that could at the very least be problematic, if not insurmountable. I don’t know if this might be too challenging for you, but it is definitely something you need to think about.”

There was nothing to think about. I had total peace. I knew God’s guiding hand was upon these children. They were going to be mine.

And when the attorney said, “They are due the first week of May,” I thought, May? Seriously? Another miracle! What an amazing God we have.

In the midst of the ensuing chaos, it occurred to us that our family was growing in size but our living quarters were shrinking. We were gaining two children and losing a bedroom.

Hoping to have a son and knowing the babies would need to share the third bedroom, prayers began for twin boys…the least likely option in a twin birth. Of course. We needed yet another miracle in order for that to happen and I hoped it wasn’t too much to ask.

The first week of May, we came home one evening from a family barbecue to an answering machine message from our frantically happy attorney.

The babies had arrived! Identical twin boys!! Huge and healthy, full term, one minute apart. The answer to five prayers repeated over two years for a May baby, twins, an adoption, an American Indian child, and two boys PLEASE.

The miracle of five prayers and two brothers. Not in my wildest dreams did I imagine all five prayers working together for good in just one miraculous minute on a beautiful spring day in May.

Thanks be to God and to God be the glory for the things He has done…”He maketh the barren woman to keep house and be a joyful mother of children. Praise ye the Lord.” Psalm 113:9