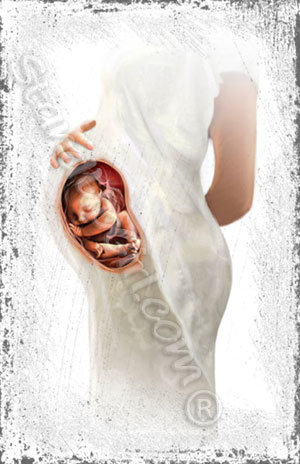 This image is copyrighted StandUpGirl.com

Overall growth is rapid this month and your baby may gain as much as a half a pound per week.

At eight months of pregnancy, your baby may weigh from 4 to 6 pounds and is gaining about half a pound per week. Layers of fat are piling on under her skin. Soon she will turn head down in preparation for her coming birth.

Most body organs are now developed with the exception of the lungs and if the baby kicks you’ll not only feel it but also be able to see it on the outside. Tremendous brain growth occurs at this time and the finger nails begin to extend past the fingertips.

Did ya know?
The roots of human behavior begin to develop early — just weeks after conception in fact. Well before a girl typically knows she is pregnant, her baby’s brain has already begun to bulge. By five weeks, the organ that looks like a lumpy inchworm has already embarked on the most spectacular feat of human development: the creation of the cerebral cortex, the part that allows all of us to move, dance, run, speak and sing in a real human way. Well… most of us sing in a real human way.