I Had To Feel That Way 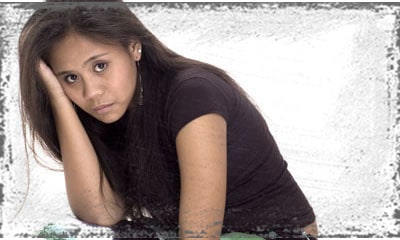 I was so scared because I had a feeling already but i had been denying it for about two weeks. And finally my reality hit me in the gut. I watched the test read the first line, and then the second. I checked the box so many times because I thought for sure it was a mistake, but it wasnt and I burst into tears, partially because of the reality, and partially because I was right all along. I was pregnant. There was something growing alive inside of me, something that would call me mom.

I crawled into the empty bathtub and cried my eyes out to my boyfriend on the phone. I told my sister and she cried too. I decided to spend the night at her house because I just couldnt go home. my brother drove me to my boyfriends later that night and we layed in bed talking about what we would do. We had already talked about it before and decided to have an abortion, but when reality set in, it was a whole new battle. We both thought we could do this. I calculated when he/she would be born, it was going to be a leo, like both me and my boyfriend. But we knew what we had to do. The timing just wasnt right.

Still there was something wrong. I could do nothing but think about life with the baby. I knew I could do it. I knew it and I knew he would be there. I felt so hopeless. I told my mom a few days later and then my dad. And I was pushed to have an abortion, immediatly, because they just “want the best for me”.

A week later we went for an ultrasound to start the process of a non-surgical abortion. my mom waiting in the lobby while my boyfriend came with me through everything. The ultrasound said I was six and a half weeks pregnant about three weeks farther along than I had thought.

That day was so hard. I had to take a pill in front of my doctor to terminate the development of the fetus. I stayed with my boyfriend the rest of the day, in my head it was all okay, I felt like it was for the best of my baby, my family , and myself because I had to feel that way despite my thoughts of “what if”. I had to force myself to think this was going to be for the best. I was too young to be a mom, and not ready.

The following day I took the next four pills of the non-surgical method. It was much more painful than anyone had told me, I was alone, and scared, and helpless. I couldnt ever utter my cries, because the pain was so horrific and and then the worst thing happened. The pill was made to make the abortion more period-like, but what I saw was not at all what i had planned, I saw a fetus, about the size of a gold dollar. It was the worst thing I have ever gone through.

Everyday I think about the “what if”. I would be about eight weeks into my pregnancy by now. I had already gained five pounds by the time I was six weeks, so by now I would probably have a little pooch. I see pregnant teens all around me and i can only cry. I still seem to hold my stomach out of habit, just hoping he/she would somehow come back, and everyday I cry.

I wish I would have kept it and so does my boyfriend.

At this point, after my abortion it is very easy to get pregnant again, me and my boyfriend have decided that if this were to happen again we would keep it because we cant go through that again. I know now what its like to have something inside you taken away, and I can’t bear to do that again… those doubts don’t ever go away

My name is April and I help Becky answer emails.

I’m so glad you decided to write and so sorry you had to go through all this. I’m sure it must have been terrible. I can tell you are still hurting because of it, but I’m here for you no matter how you are feeling.

You know, a lot of women go through shame, depression, regret, and denial after an abortion. It is ok if you are feeling that way. Abortion is a huge thing, and it is ok to not be ok.

I am glad to hear that you have people around you who can be a support to you during this time. Have you spoken to anyone besides your boyfriend about the way you have been feeling? Sometimes the best way to handle grief is by talking to someone about it.

You know what? I want to give you a place to go where you can join a support group of other people who have gone through the same thing as you. Let me tell you how to find one in your area.

Go to: http://www.optionline.org/advantage.asp or you can call 1-800-395-HELP. At the website all you have to do is type in your zip code and a list of centers will appear. Just call the center and tell them that you need post abortion care. They can get you into a free program to get the help that you need.

I have talked with a lot of women who said they were not fully healed from the pain of their abortion until they joined the support group. It’s free so it won’t hurt to give them a call and check it out.